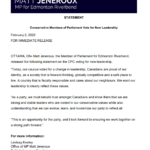 February 2, 2022 FOR IMMEDIATE RELEASE OTTAWA, ON- Matt Jeneroux, the Member of Parliament for Edmonton Riverbend, released the following statement on the CPC voting for new leadership. “Today, our caucus voted for a change in leadership. Canadians are proud of our identity, as a society that ... Full Article 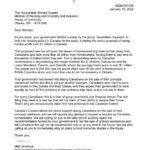 The Liberal Government, funded a study by the group ‘Generation Squeeze’ to look into housing policy in Canada. In the study, it makes the policy proposal of taxing homes worth over $1 million in Canada. Please see my letter rejecting any attempt to impose a new tax on Canadian homeowners. Full Article

November 9, 2021 FOR IMMEDIATE RELEASE OTTAWA, ON – Matt Jeneroux, Member of Parliament for Edmonton Riverbend, has been named Shadow Minister of Housing and Diversity and Inclusion. Since being elected federally in 2015, Jeneroux has served as the Shadow Minister of Infrastructure and ... Full Article

The Canadian government currently requires travellers re-entering Canada to provide a negative molecular (PCR) COVID-19 test, taken within 72 hours upon entry, regardless of their vaccination status. Fully vaccinated Canadians are not allowed to provide a rapid test when returning to Canada. A ... Full Article

On October 8, 2021, I wrote to Immigration, Refugees and Citizenship Minister Marco Mendicino about flaws in the Parents and Grandparents Sponsorship Program. Click below to view my letter. Sponsorship Letter Full Article

September 21, 2021 FOR IMMEDIATE RELEASE EDMONTON, AB – Today, Matt Jeneroux, the Member of Parliament for Edmonton Riverbend, released the following statement on his re-election to the House of Commons: “I’m so incredibly humbled to be re-elected for my third term as your Member of ... Full Article

On July 12, 2021, I wrote to the Minister of Public Safety and Emergency Preparedness to ask when the government would present a plan to reopen Canada’s borders with the United States and the rest of the world. Click below to view my letter. LETTER – Min of Public Safety Border ... Full Article

This article appeared in the Hill Times on Monday, July 12, 2021. The original version can be found here. Two Conservative MPs from Alberta were among the few who accomplished a rare feat in June: seeing their private members’ bills passed into law. For Conservative MP Len Webber (Calgary ... Full Article