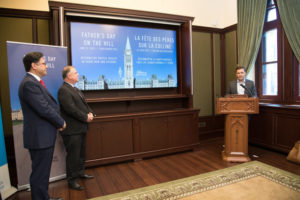 OTTAWA, ON – Member of Parliament Matt Jeneroux hosted his annual Father’s Day on the Hill: Conversations About Mental Health event to raise awareness for mental health in young men and fathers.

The event, co-hosted with the Mental Health Commission of Canada, was held on Parliament Hill on Wednesday, June 12. 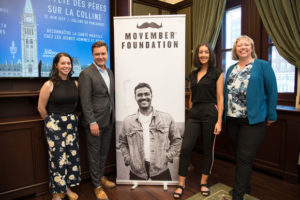 Jeneroux started hosting the event because men’s mental health is rarely discussed publicly, even though 80 per cent of Canadians who die by suicide are men.

“Many men and young fathers, like me, have struggled with depression and anxiety. Though we experience mental illness at about the same rate as women, men are less likely to talk about mental health struggles,” Jeneroux said.

“We want to stamp out the stigma by holding this annual event, which signals that it’s okay to talk about these issues with your friends and family. It’s okay to seek help.”

Speaker of the House of Commons Geoff Regan, Liberal MP Majid Jowhari and NDP MP Gord Johns, the Mental Health Commission of Canada and Movember also participated in the event.