As we all know, it has been an unprecedented year so far. I am looking forward to returning to Ottawa this week and continuing the work that is needed to support all Canadians during these challenging times.

Here is a small recap of some of the work that has been done since the beginning of 2020. 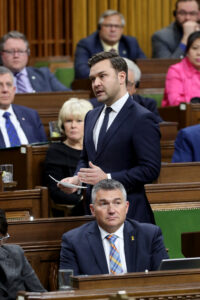 JANUARY
In January, I was named Shadow Minister for Health. I assumed the role at a busy time; we were just beginning to see the first cases of COVID-19 in Canada. Since taking on the role, I continually pushed the government to ensure we had enough medical supplies, personal protective equipment stockpiled and continually asked what we were doing to protect our borders.

At the end of January, I asked the first question in the House of Commons about COVID-19: “How can Canadians be assured that this spread is being properly contained?” Health Minister Patty Hajdu replied: “The risk to Canadians remains low. Our systems continue to work extremely closely together.” I also questioned Dr. Theresa Tam about Canada’s response to the coronavirus. 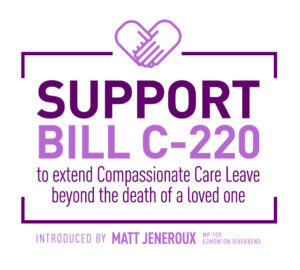 FEBRUARY
In early February, I asked more questions in the House of Commons on why Canada had not declared a public health emergency or cancelled flights from China like other countries have. Hajdu replied: “We do not need to call a public health emergency here because we already have the structures, the systems and the authorities to spend appropriate dollars necessary to respond, treat and maintain our public health systems.” Hajdu also scolded opposition MPs for “sensationalizing” the risk to Canadians. I continued to ask the government about its plan to address COVID-19 during Question Period in the House of Commons.

In late February, I was proud to introduce my Private Members’ Bill in the House of Commons. This bill proposes to extend compassionate care leave for caregivers beyond the death of a loved one.
**As of July 22, 2020, this bill has only had its first reading. You can read more about the bill here.

MARCH
In March, The World Health Organization declared the global outbreak of COVID-19 a pandemic. Dr. Tam and Hajdu were again questioned at the House of Commons Health Committee and continued to say that Canada is telling international passengers to self-isolate upon return to Canada. On March 13, the House of Commons was suspended until April 20.

In mid-March, I released two statements, first calling on the government to implement a strong response to COVID-19 at airports and then calling for more information for manufacturers in the fight against COVID-19. Read the two releases here and here.

The Health Committee started to meet virtually this month, becoming the first House of Commons committee to do so. The virtual meetings focus on Canada’s response to the coronavirus.

APRIL
In early April, I announced I would donate my legislated pay increase to local charities working to fight against COVID-19. All Canadians are impacted by COVID-19 and I wanted to ensure I was doing everything I can to help our community, which is why I chose to donate this mandatory pay increase. That week, I also sponsored a petition from a local nurse to protect front-line health care workers and released a statement calling on the government to address medical equipment shortages.
Find more information at these links:

In late April, I spoke about Canada’s response to COVID-19 on behalf of the Conservative Party in a hybrid sitting of Parliament. You can watch my full speech here.

Putting WHO on the spot
In mid-April, I introduced a motion at Health Committee inviting Dr. Bruce Aylward, a Canadian advisor to the WHO, to appear before the committee after an abrupt cancellation before his planned appearance. After the invitation for Dr. Aylward to appear before the House of Commons Health Committee was declined, I put forward another motion to summon Dr. Aylward before the committee. The motion passed unanimously, meaning Dr. Aylward can be detained and made to appear the next time he lands in Canada.
Learn more here and here. 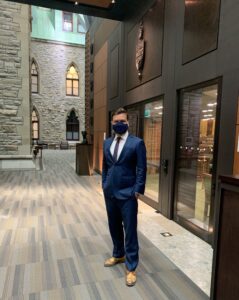 MAY
In May I returned to Ottawa for the first time since Parliament was suspended and was able to question the government on its response to COVID-19.

The next day, the Canadian government issued a recommendation that Canadians wear non-medical face masks while out in public.

Patented Medicine Prices Review Board (PMPRB)
I also released a statement calling on the government to delay the planned amendments to the Patented Medicine Prices Review Board (PMPRB). The changes, which were to be introduced on July 1, would set aggressive price ceilings for new therapies, especially for rare disorders, making it almost guaranteed that these therapies will not be brought to a Canadian market. During a hybrid sitting of Parliament, I asked the government about the PMPRB changes.

You can read my op-ed in the Hill Times about the PMPRB changes and learn more about PMPRB here.

JUNE
For the last two years, I have proudly hosted Father’s Day on Parliament Hill in Ottawa with help from the Mental Health Commission of Canada and Movember. Every year, this non-partisan initiative has brought together Members of Parliament from all parties, key mental health stakeholders and policy makers to help bring awareness to the importance of men’s mental health. This year’s virtual version of the event brought together several prominent Canadian men including Bryan Baeumler, Peter Mansbridge, Georges Laraques, Craig McMorris and more to help end the stigma.

At the end of June, speaking at the Health Committee on this subject, I put out a news release calling for airlines to refund passengers for trips cancelled due to COVID-19. 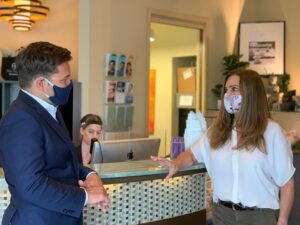 The Terwillegar Drive expansion was also great news for our community. In 2018, I sponsored a petition in the House of Commons calling on the federal government to prioritize construction. I’m very supportive of these upgrades and what it will mean for our community. You can read my release and view the petition.

This month I also: 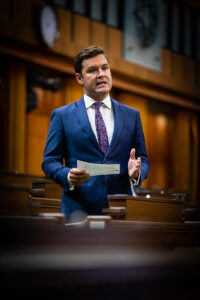 After concerns raised by Canada’s health community, I wrote to the Minister of Health to push for a transparent plan on Canada’s vaccine development. Later in August, the government announced it had reached a deal with two companies to develop and distribute a vaccination to Canadians by 2021, if successful.

I was in Ottawa on August 12 to attend the Special Committee of the House of Commons. I had the opportunity to question the Minister of Health about Canada’s National Emergency Strategic Stockpile and also asked the government about its plan to reunite Canadians who are separated from loved ones due to the ongoing border closures. Later that day, I participated in a non-partisan press conference calling on the government to unveil a clear plan to allow bi-national committed couples and adult children to see their loved ones in Canada.

I released a statement following the resignation of Canada’s Finance Minister and another statement about the prorogation of Parliament.

In September, I continued to advocate for Canadians separated from their loved ones and participated in an online video interview with Faces of Advocacy founder Dr. Poon.

I also released a statement updating constituents about my Private Members’ Bill, which still remains at its first reading and will continue to go through the debate stages should Parliament resume as scheduled on September 23. With less than a week until the Speech from the Throne, I released a statement calling on the government to inform Members of Parliament of its plan for sittings of the House of Commons.

I continued to work on broadening the definition of immediate family to allow loved ones who have been separated by border closures to reunite. On September 23, I released a statement with my reaction to the Speech from the Throne.

On September 25, I was the only Member of Parliament from Alberta named to the House of Commons Standing Committee on Environment and Sustainable Development.

After weeks of advocacy from Members of Parliament, the federal government added travel exemptions, making it easier for loved ones who have been separated by border closures to reunite.

In October, I also released a statement about national unity and wrote a letter to the Minister of Foreign Affairs calling on the Canadian government to condemn the violence in Nigeria.

At the Environment Committee, I put forward a motion to study the economic impacts of the government’s recently announced ban on single-use plastics.

Environment Committee members had an opportunity to question the Minister of the Environment in early November. I asked him about the government’s new Clean Fuel Standard and the impact this will have on the energy industry.

On November 6, I was in Ottawa for the second reading of my Private Members’ Bill to extend Compassionate Care Leave. I was pleased that the bill has the support of all parties. It will be further debated in the House of Commons in February 2021.

As a co-chair of the all-party Parliamentary Aerospace Caucus, I participated in a panel discussion about the current state of the aerospace industry on November 18. It was a great discussion about how to champion our world-class aerospace sector and how to help the struggling airline sector in the wake of COVID-19.

At the end of November, I was able to participate virtually in the government debate on Bill C-12, an act to get Canada to net-zero emissions by the year 2050. My speech is available here.

On November 30, the Finance Minister released the long-awaited fall economic statement, which outlined spending that has been done on COVID-19 and other priorities. Canada’s debt and deficit is forecasted to be the highest in its history. My statement on the economic statement is available here.

I was again in Ottawa during the first week of December, where I had the opportunity to participate in debate on the federal government’s plastics ban. I also met virtually with a number of environmental stakeholders.

In December, I also issued news releases about changes to Canada’s elections act to accommodate an election during the COVID-19 pandemic, what our office is doing to help constituents dealing with CERB problems and new testing rules for international travelers entering Canada.